Carly Sandin Kijewski conducts Space Grant-funded NASA internship as an undergraduate, gets accepted into NASA's Pathways (co-op) program as a graduate student, and plans to convert to permanent status at Goddard Space Flight Center upon graduation. 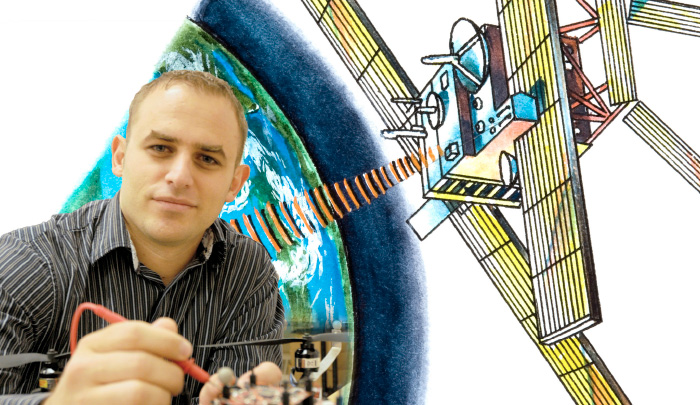 John Ziadat, a senior Mechanical Engineering student at SDSM&T and Space Grant Fellow who graduates in December 2014, recently accepted a full-time offer from Space Exploration Technologies (SpaceX) where he interned during summer 2014.  John will join the Hawthorne, CA-based aerospace company as a Mechanical Design/Automation Engineer.  As an intern at SpaceX, John’s major focus was the development of an automated Phased-Array Ultrasonic inspection system for the Falcon 9 and Falcon Heavy rockets.  The design was conceptualized and implemented by John and another intern in his department at SpaceX.  Once up and running, the system will reduce the man-hours spent by the company on Phased-Array Ultrasonic inspection by ~60%.  It will also drastically improve the quality of Phased-Array Ultrasonic inspection for all rockets that leave the factory.  As an undergraduate, John was awarded several SDSGC stipends; the bulk of which were in support of his involvement with the SDSM&T Moonrockers Lunabotics (aka NASA Robotics Mining Competition) team.  This robotics team sets out annually to design a fully-autonomous mining vehicle for application on the Moon or Mars.  John has been an active member of the team since he was a freshman at SDSM&T and plans to continue to do so throughout the 2014-15 campaign.  John stated that the SDSGC has been indispensable in his experience with the Moonrockers team and he is very appreciative of the financial support from Space Grant.  He said: “Any success that this team has enjoyed over the past five years has been made possible only through the generous and consistent support of the SDSGC.  Thanks to them, this team has been able to produce some outstanding engineers who will go on to do great things.”

Shea Thorson, a recent SDSM&T graduate with an Interdisciplinary Sciences (Pre-Professional Health Sciences) degree, conducted a summer 2013 internship at NASA JSC.  Shea is a Space Grant fellow, but her JSC summer internship was fully funded by NASA USRP.  Her project was titled Development of a Field-Compatible Dynamic Visual Acuity Test and was conducted in JSC’s Neuroscience Laboratory under the mentorship of Dr. Millard Reschke, Chief

of Neuroscience at NASA.  The prior summer, due to Shea’s experience and interest in health science, she accompanied handicapped student Dustin Swanson as his aid when he conducted an internship at JSC.  Shea became fascinated with NASA as a result of that experience and went on to secure her own internship the following summer. The Neuroscience Lab performs various tests on the human vestibular system, which is an essential component to an astronaut in terms of performance and safety, providing a sense of balance, coordination, and movement. The vestibulo-ocular reflex (VOR) is responsible for maintaining a stable gaze by evoking eye movements in response to changes in head position. The dynamic visual acuity (DVA) test, which is currently being collected as part of the NASA Functional Task Test (FTT) experiment, is a suitable means to functionally measure the VOR of astronauts before and after adaptive changes occur due to microgravity exposure. Shea’s specific task was to turn an existing DVA test into a field-compatible test so that scientists from JSC’s Neuroscience Lab, and their counterparts in Russia, can collect data from astronauts in Kazakhstan within one hour of landing, rather than having to wait 24 hours to conduct the test upon arrival in Houston. It is necessary to collect immediate post-flight data in order to create a timeline of recovery for astronauts who will eventually spend over six months traveling to Mars.  Dr. Reschke, Shea’s NASA mentor, was so impressed with her abilities as an intern that he secured a job for her in his Neuroscience Lab with a NASA contractor upon her graduation in May 2014. Commenting about her internship experience, Shea wrote: “I had the honor of interning at NASA’s Johnson Space Center in Houston for 10 weeks in the summer of 2013. I met some of the most intelligent people I have ever encountered and made many wonderful memories. It was by far the best summer of my life."